Assault vs Assault Black by MusclePharm 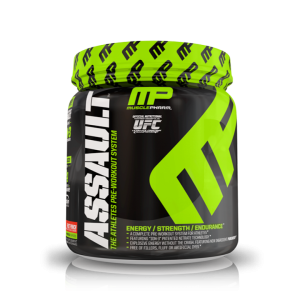 Assault by MusclePharm has become one of the best and well known pre workout supplements on the market. When Arnold Schwarzenegger made the transition to the supplement industry, he chose MusclePharm’s Assault formula to design his line of pre-workout. Assault is the original formula to which several other supplements have been based, including Assault Black which will be discussed later in this article. Lets dive into the main components of Assault by MusclePharm and discover why it has been such a winner over the years.

Each serving of Assault comes chock loaded with a variety of performance enhancing ingredients. As a pre-workout Assault has 4x the amount of grams per serving due to its complex blend. Each scoop has beta-alanine, BCAA’s, 300mg of caffeine and a pump matrix. Each scoop contains the equivalent of 3 cups of coffee so if you are sensitive please dose appropriately.

Assault’s BCAA complex contains a fully stacked branch chain amino acid complex which is rich in Leucine. Leucine is a critical amino acid as it stimulates the m-TOR pathway which stimulates protein synthesis on its own. It basically acts as a signaling amino acid to the body telling it that there is an ample quantity of protein available and to turn on protein synthesis. This is critical during a workout as exercise is catabolic in nature, having m-TOR activated during workouts helps to prevent muscle loss and therefore increase lean muscle mass retention.

The pump matrix contains a nitrate transported pump combined with creatine to help molecules greatly improve cellular uptake of these performance enhancement mechanisms. Assault also contains cinnamon extract which has been found to balance blood sugar. This balancing has been shown to help growth hormone production and thereby helps those who might be consuming too much sugar and simple carbs. Choline Bitrate is also included in the mix and increases mental alertness and clarity which increases the mind muscle connection required for a great workout.

Assault comes in a wide variety of flavours, all of which are easily mixed into water or juice and provide a smooth drinking experience. Pre-workouts are not normally known for their great taste, however Assault has a number of excellent reviews on most of its flavours and proves to be a delicious performance enhancing pre-workout 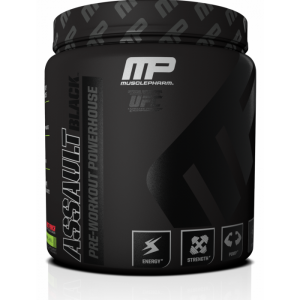 Just as in the original Assault, Assault Black contains a blend of BCAA’s (Leucine, Valine and Isoleucine). As described earlier in the article having Isoleucine is key to stimulating m-TOR pathway for protein synthesis without the use of hormones. BCAA’s provide muscle repair and increase muscle growth over time.

Assault Black contains multiple stimulants that help to both intensify training sessions and optimize muscle activation through your workouts. Assault Black contains Citrulline Malate, Agmatine Sulfate, Caffeine Anhydrous, Beta-Alanine, Creatine HCL, elevATP and BioPerine Black Pepper. Citrulline Malate helps to replenish energy and improve muscular contractions for a longer workout. Agmatine Sulfate stimulates multiple processes during an intense training session and also improves vasodilation or “muscle pump”. Beta-alanine delays fatigue by buffering lactic acid in muscles and also aids in lean muscle mass gain. Creatine HCL is a type of creatine that dissolved much easier than regular creatine monohydrate. This allows the body to absorb creatine much more readily during a workout where available ATP is crucial. ElevATP is a well researched ingredient that works with our natural energy-producing mechanisms to stimulate production of ATP which is the energy currency of the body. Lastly BioPerine Black Pepper helps by significantly enhancing the bioavailability of supplemental nutrients by increasing the body’s ability to absorb those nutrients.

Assault Black also comes in a wide variety of flavours, all of which are easily mixed into water or juice and provide a smooth drinking experience. Assault Black brings to its line multiple flavours for the enjoyment of its customers.

What makes MusclePharm so unique is its commitment to athletes and to products with no banned substances. MusclePharm has created two excellent products described in this review which both are extensively scientifically research and contain no banned substances. Assault Black goes as far as to having no proprietary blends within it’s mix. That is a true mark of professional supplement product creation as most competitors will hide the amounts of certain ingredients within a proprietary blend whereas Assault Black tells you 100% exactly what you are putting in your body. This commitment to natural athletes does not go unnoticed, many athletes in drug tested sports trust MusclePharm for their supplementation needs, and Assault Black takes that commitment to the next level of ethical sublimation. Assault Black is a pre-workout to which all pre-workouts should be measured against for this commitment to quality and safety.

Both Assault and Assault Black are excellent choices for a pre-workout. Both are banned substances free and contain muscle enhancing properties combined with a BCAA complex. Assault Black takes it one step further by creating a non-proprietary blend which is truly remarkable in the supplement industry where the norm is to hide ingredient ratios and compete against each other fiercely. MusclePharm clearly is making a significant ethical contribution to the supplement industry that the writer hopes to see more of in other supplement companies going forward. Assault comes in at a lower cost as it is missing some of the newer components that Assault Black contains, however both supplements will extend your workout duration, give you a great muscle pump and improve your athletic performance.

Related Articles
We will be happy to hear your thoughts

The Truth About Protein Supplements