For this post, I will be reviewing two of my favorite and very solid pre workouts: Pre Jym and Pre Kaged.

The two are quite similar and many people find it hard to pick one. But the good news is that I am going to make it a LOT simpler for you to decide the right pre workout supplement for you.

Before I begin with the real part of the review, I would like to highlight the Pre Jym controversy. Apart from Pre Jym, you might also come across Pre Jym 2.0, which is basically an identical pre-workout to Pre Jym (only the price and packaging is different) but is sold via GNC only.

Then, if BodyBuilding.com who has got the exclusive selling rights of Pre Jym then why It’s available from GNC? If you are going to buy the original Pre Jym, try bodybuilding.com only; it’s a few dollars cheaper than GNC and Amazon (see below for pricing).

Both Pre Jym and Pre Kaged are closely priced, while Pre Kaged is relatively and marginally cheaper.

If you are looking for the cheapest deal, go with Pre Kaged from Amazon.  Moreover, if you are going to stick with Pre Jym, try the original version over Pre Jym 2 as it’s cheaper and does the same job as its next-gen counterpart.

As usual, I am only going to look at the ingredients that are actually worth putting into a supplement. Any unusual or patented complex that doesn’t back its potency with clinical studies is just a filler to me. Following are a few important ingredients (and their quantities) that are found in these two supplements: 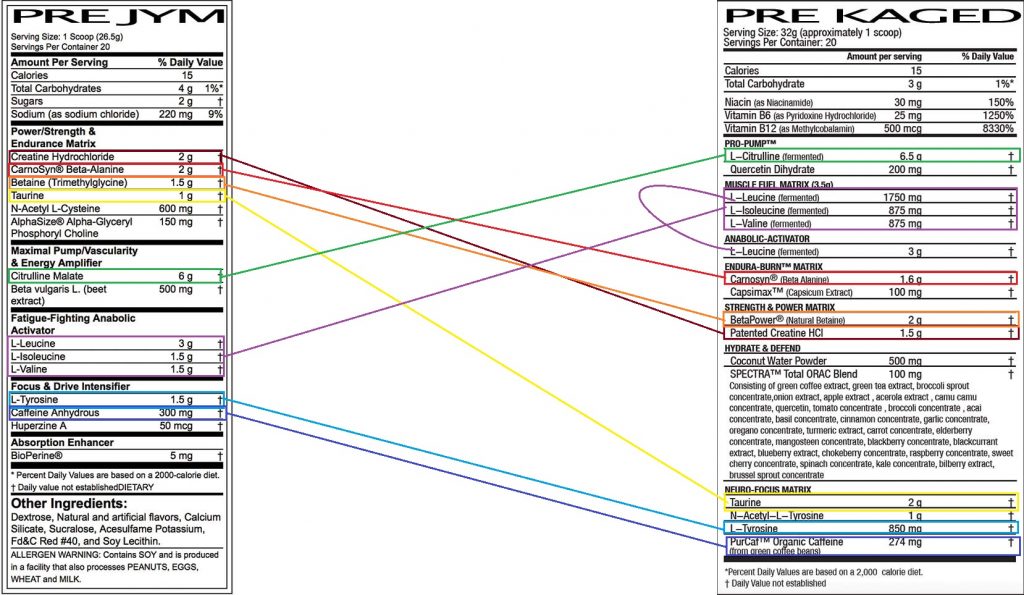 Taurine has a few different benefits as a pre workout. First, it’s known to improve the blood flow without increasing the blood pressure, which is great actually, because you need to have better blood circulation to lift big in the gym. Second, it improves mood by decreasing the cortisol levels in the body which is a stress hormone. It’s used in pre-workouts and also in energy drinks to give to that extra spike that you need when you are feeling low on energy. To get results, Taurine needs to be dosed between 500mg and 2000mg. For Pre Jym, it’s 1000mg; for Pre Kaged, it’s 2000mg (winner: Pre Kaged).

Betaine is an amino acid that has also been associated with improving strength and muscle mass. It also provides the body with the essential power required to lift big in the gym. Studies have shown that taking 2.5g of Betaine daily can improve your gains and strength. Pre Jym includes 1500mg while Pre Kaged has 2000mg of Betaine. (winner: Pre Kaged)

Creatine hydrochloride is the newest form of creatine that’s available on the market. It’s an alternative to the famous creatine monohydrate that we have been using from years. Creatine HCL, however, is definitely getting more attention due to it’s enhanced solubility and stability. For this exact reason, we need less creatine HCL as compared to creatine monohydrate to bring out similar same results. Personally, I would prefer a pre-workout that doesn’t offer creatine. Why? Because creatine stresses kidneys a lot and its prolonged use can be quite risky. Therefore, it’s always recommended to cycle creatine to avoid getting any harmful effects to the body. I believe, the lesser it is, the better it is. Pre Jym gets you a total of 2000mg of creatine HCL, while Pre Kaged gives you 1500mg (winner: Pre Kaged).

This is my favorite ingredient on a pre workout. There isn’t a better thing than caffeine when it’s about boosting your performance in the gym. There are dozens of papers and probably thousands of personal anecdotes available on the internet, all of them corroborating the benefits of caffeine as a physical and mental booster.

Caffeine boosts dopamine, serotonin and acetylcholine levels in the body which leads to a better mood, focus and more control over your emotions. But the real benefit of caffeine kicks in when it blocks adenosine receptors and while substituting them with more catecholamine. All of this leads to the release of more blood to the muscles, better breakdown of sugar and a faster heartbeat.

Personally, I enjoy having around 300mg of caffeine in my pre-workout, but for some, it’s a little too much. So the typical dose stays around 200mg for most people, whereas, 100mg is too low for a pre workout. You get 300mg Pre Jym and 274mg from Pre Kaged. The difference is not much, but I would go with Pre Jym in this case.

L-Tyrosine is a typical pre-workout substance found in most pre-workouts. However, some new pre-workouts are now using N-Acetyl L-Tyrosine (apparently absorbs better in the body) instead of only L-Tyrosine. But Tyrosine itself is a tested and proven substance. Studies suggest that Tyrosine can improve cognitive abilities, reduce stress and induce fat burning. A good Tyrosine dose has to be around 500mg to 1000mg. In the case of Pre Jym, we get 1500mg of Tyrosine and only 850mg in Pre Kaged (winner: Pre Jym)

BCCAs like L-Valine, L-Isoleucine, and L-Leucine improves protein synthesis in the body and improves muscle recovery and growth.

We get a total of 6g of BCCAs from Pre Jym and 3.5g from Pre Kaged.